Being bilingual and being a translator: a question of semantics? 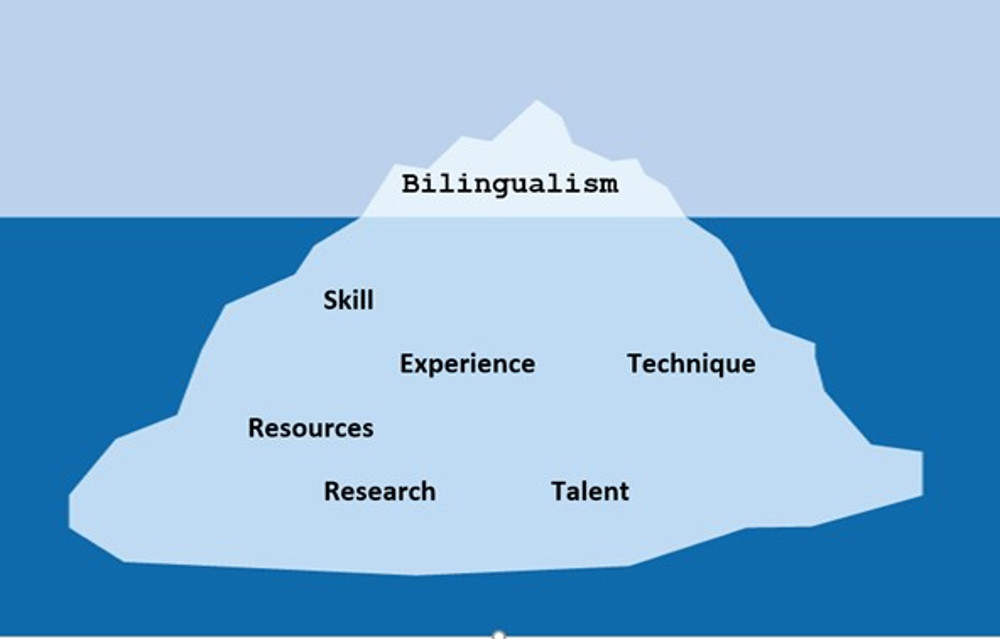 It would be easy to assume that being bilingual is all you need in order to be a translator. However, bilingualism is a prerequisite. Just speaking two languages does not make someone a good translator. Keep reading to find out about the various components that make up a good translator.

Being bilingual or even multilingual is undoubtedly a valuable asset. Being able to speak and understand different languages allows you to see the world through multiple pairs of eyes. After all, languages are more than just the sum of their words and grammar. Rather, they open up a whole set of new perspectives and communities.

But can we equate bilingualism with adequate translation skills?

The answer is: no, not directly. Of course, a translator has to be bilingual; that is necessary. But bilingualism is not sufficient.

Translation is more than the ability to understand or produce equivalent sentences in two languages. Translating consists of more than just input and output. The process that takes place between the two is just as important.

Translators are bilingual people who excel at a complex craft.

Somewhere between art and craft

Translating is a strange process that lies somewhere between a craft and an art form. On the one hand, there are tools and techniques with which translators work in order to achieve an accurate final product. On the other hand, translators need – unfortunately, there isn’t a better way to put it – a good feel for their work, particularly when it comes to making good use of glossaries and dealing with complex and winding sentences and contradictions.

The skilled craft comprises meticulously transferring the meaning of the original text into the target language. The art involves knowing when to use a certain term and when to opt for an alternative. It is the decision to translate one sentence in the source text as three in the target text. It is the masterful handling of contradictions and ambivalences. The art of translating is, well, all the other aspects.

Beware of the ever-lurking traps

When translating, there are a whole bunch of traps into which one can fall. A true professional knows where they like to hide and guides their sentences accordingly. After all, you can never be too weary of false friends, dropped references, and linguistic devices that only work in one of the languages.

Figures of speech and sayings can and should be translated, but in doing so, the translator must ensure that they remain meaningful to the target readers. In this case, the translator must often hunt for the target language equivalent rather than simply translating the turn of phrase literally – often much easier said than done and truly a job for professionals!

Texts are, at least hopefully, more than just words strung together according to the grammatical rules of a given language to form a sentence. To put it somewhat crudely, every text, no matter how short, is about a specific topic.

For a translator, this often requires a lot of research. Obviously, they must acquire a general understanding of the subject matter. However, it also means that a translator will examine other translations and texts on the subject in order to make sure that their translation meets all of the standards of the field in question. Terminology and register must both be up to par to guarantee the target reader a smooth read.

Once again, it pays to be a professional. A good, experienced translator knows just where and how to find good reference material and is able to quickly extract the necessary information.

This final point is one that is often overlooked: Translators must also be good writers. The final product that the client receives has to be a tight, well-written text. That means that a translator must not only be competent when it comes to transferring meanings between languages but must also have a way with words and a beady editor’s eye for detail.

To be a good translator, you have to be skilled in areas that are not always apparent to the outside world. That’s why it is always worth it to work with professionals. With GlobalSprachTeam, you can rest assured that your text is safe and sound in both bilingual and professional hands!

What did you think of this blogpost? Are you bilingual or maybe even multilingual? Let us know on Twitter!